Book Spotlight: The World to Love and Not to Love by Horace Allen 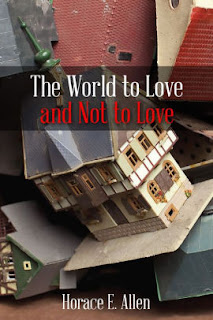 Understanding the true nature of the world's system, contrasted with God's creation, will bring clarity to readers and help Christians make right choices to live God's way. God's standard of righteousness is contrasted with politically-correct responses and declining ethical and moral standards.

There are two worlds--God's creation and the present world system. God loves His creation and has a restoration plan for it. But the world's system organized under the direct influence of the devil is in direct opposition to God. Horace E. Allen reveals the true nature of the world we should not love.

Social and political correctness have replaced God's standard of righteousness. The result is a world system in constant moral, social, and ethical decline. This declining moral system is constantly being redesigned by man's imagination to accommodate his unrestrained sinful desires. What was once immoral is now accepted as normal. Christians who determine to maintain a biblical standard are put on the defensive and labeled intolerant.

Understanding the true nature of the world God created and this world's system will help us make right choices to live God's way.

There is a clear line between what is godly and what is ungodly. Likewise, there should be a difference between the standards of believers and nonbelievers. The World to Love and Not to Love will give readers clarity about the dividing line between the secular and spiritual worlds.

Horace Allen is licensed in New York State as a professional marriage and family therapist with a B.S. degree in psychology from New York Institute of Technology; M.S. degree in counseling from St. John’s University of Queens, and a D. Min from Andersonville Baptist Seminary. He served as senior pastor at the East End Baptist Church, Brooklyn, New York for thirty-four years. Now semi-retired in Florida, he conducts seminars, speaks at conferences and maintains his therapy practice through video and telephone sessions. He and his wife of fifty- two years have two children and two grandchildren. Dr. Allen is also the author of Thinking with the Heart: Principle, Practice and Purpose for Spiritual Wellness.
Posted by Cheryl at 11:26 PM