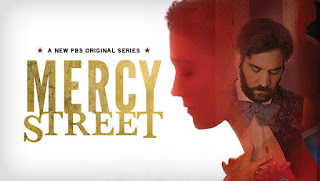 Annoyed. Agitated. Disappointed. I feel all this and more at the recent news that Mercy Street--PBS’ Civil War-era medical drama--has been cancelled after just two seasons. In this world of reality television, Mercy Street was a breathe of fresh air: drama, romance, and an exploration into a tumultuous time in our country's history. Giving both equal time to those inside and outside of Mansion House Hospital, this period drama captivated me from the start.

Josh Radnor as Dr. Jedediah Foster and Mary Elizabeth Winstead as Mary Phinney were just two of the outstanding actors that made the show worth watching. Mercy Street's strength resided in its character development: both in one-episode characters and recurring.

While Season 2 ended powerfully with the announcement of the Emancipation Proclamation and the promise of better things to come, there are so many stories left unwritten. Will Emma Green and Chaplain Hopkins be able to get beyond what happened at the creek? How will the death of her only living son impact Hospital Matron Brannan? Will Silas Bullen continue on the straight and narrow? Can James Green Jr. ever meet up to his family's expectations?

There is a #SaveMercyStreet campaign and a petition to sign. As of right now, I am adding Mercy Street to my list of reasons I hate getting caught up in shows only to see them cancelled. This list includes: Dawson's Creek, Buffy the Vampire Slayer, Angel, and Cedar Cove.